June 17, 2010
In the view frustum culling scenario, the culling-in objects like the bottom figure shows: 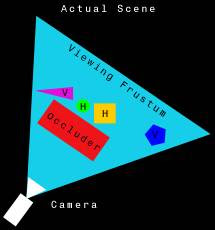 But in the practical view looks like the bottom figure, we just need to render three objects: red, purple, and blue one. The green and yellow one are hidden. 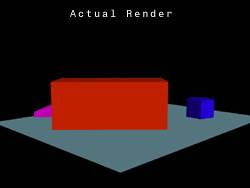 In this condition, we can adopt GPU hardware support. Direct3D provides Occlusion Query to calculate number of pixel visible. If the number is zero, meaning it is fully occluded, else is greater than zero  the pixel is visible by the viewer.

The IDirect3DQuery9 process is presented below:
In the first step, we need to decide the bounding mesh. Use bounding box? sphere?...The suit way is using lower vertex count mesh to instead of bounding box or sphere. 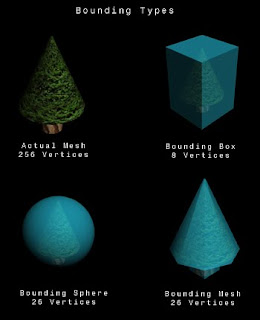 At the second step, occlusion query to determine each object's visibility status. If the query is zero pixel, the object is exclude from the final draw, else the object is include in the render list. Adopt much smaller surface (320 pixels to 240 pixels) is used to improve performance.